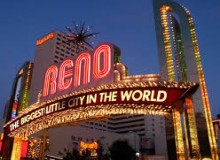 Aside from being home to the popular Comedy Central television show Reno 911, Reno is also home to some 225,000 residents that make up the second largest city in Nevada. Located just east of the California-Nevada border, it is quaintly nested between the western front of the Sierra Nevada mountain range and the vast stretch of desert plains to its east. Although it is the second largest metropolitan area in Nevada, after Las Vegas, it has been nicknamed the “Biggest Little City in the World.”

Reno hosts an abundance of secondary schools to its residents, including 12 public high schools, 13 middle schools and over 60 elementary schools. Not to mention, it has a healthy amount of private and charter schools as well. It is home to the oldest institution of higher learning in the state, the University of Nevada, as well as several other colleges like Truckee Meadows Community College and the Career College of Northern Nevada.

The University of Nevada, Reno (UNR) enrolls some 17,000 students and is known for its notable programs in mining engineering, agriculture, business and journalism. It is also one of only two universities in the U.S. that offers a Basque studies program. Nonetheless, The U.S. Census Bureau notes that the percentage of residents with Bachelor degrees is only at roughly 29%, which means that a majority of its graduates flee the city after graduation.

The desert community is home to a number of prominent academic institutions, including the University of Nevada, Las Vegas, the College of Southern Nevada and Roseman University of Health Sciences. If one hopes to establish a career, considering the quality of the competition, obtaining a college education is paramount.

Our goal at Parliament Tutors is to raise these rates up to match that of other prominent cities in the West. With the help of our services, we guarantee to nurture the students of Reno to become the best of the best. Our programs offer a wealth of private tutoring and test preparation services in the area for students of all calibers. Whether you are searching for subject specific tutoring or standardized test preparation, we have a specialist available in all levels of education and all academic subjects.